I had made an extra Verdi dog (Making Verdi) with the intent to give it to the lady who made my Queen of Hearts doll (Tish Tierney's dolls), And, earlier in the year, I had spray painted a chair for a little "Thank you" project for her.  But the scene of just "dog and chair" didn't come together until BFF suggested adding a Mad Hatter's hat and then she also supplied a cake for a stand. So the little "Thank you" gift of a dog on a chair became a more elaborate holiday gift scene.  My BFF and I decided to join forces and give our mutual friend, Tish, a little Alice in Wonderland's Queen of Hearts theme vignette.

But BFF's cake was purple and white; we needed red and white.  (Yummmmm....cake!)  So I broke out the paints one evening...
And the gray stand got a coat of paint too...eventually (didn't photograph that until scene was finished).

Then came the hat.  In theory I had a plan.  The vertical part had to be wider at the top than at the base.
We wanted the harlequin design on there so I bent a playing card to be the tall cylindrical part of the hat. 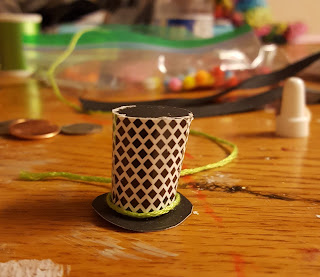 Using spray adhesive I attached black fabric to the cardstock I had used to create the brim and the top of the hat.  Glued some feathers and a green ribbon on to it. Sounded like it should have been a quick and easy endeavor yet I still managed to take all evening/night to make it, with several texts back and forth with BFF about design, color(s), and execution of the project.
So that "Thank you" scene/holiday gift was ready and all shipped off to the friend in early December!

I also made a little plastic ornament filled with kid trucks in the dirt/sand for my childhood friend who doesn't own any miniatures, but admires them.  We've been friends since we were about 9 and 10 years old and I liked that this gift harked back to those childhood memories of playing in the dirt by the little pond and stream in her back yard... 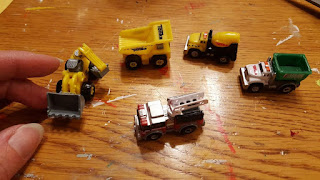 These Tonka mini toys were sold at Target earlier in the year (they still may be, I'm not sure).  I painted stripes on the plastic ornaments...
And I added some dirt and sand, glued the trucks in, and glued some trims around the opening to make little childhood scenes... 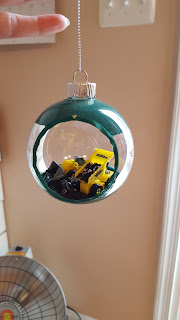 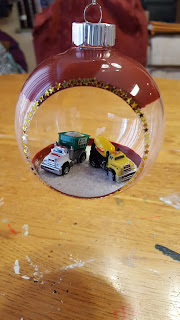 Finished those gifts for my childhood friend just moments before our gift exchange. Whew.

Texas BFF knew she was getting filled shelves for her clock shop scene for Christmas.  She wanted drawers filled with metal doo-dads and accessories the clock shop owner would need to repair clocks.  The issue was her drawer shelves were with her in Texas and I'm in Virginia.  But I had the same shelving unit for sale in my shop so I could use it's shelving drawers to make plastic template shelf liners and glue the clock accessories on the liners.


There were 12 drawers and I only had enough metal bits and liners for 11.  So friend will have to fashion/glue some bits and pieces into that last drawer.  Yeah, I'm a crummy friend, skipping out on completing this project, but that's because I was secretly working on her REAL Christmas gift...
﻿
Now, I feel badly cuz BFF knew that I was making those drawer fillers for her and it was just those 2 blister packs of metal bits that cost less than a Wendy's Combo meal (yes, everything relates to food for me).  And it took me no time at all (just one evening) to sort and glue them to the liners.  So, a long time ago I had told BFF that I would make her items for her Mardi Gras scene.  I think (I hope) she forgot about that, so hopefully these next little gifts will be a surprise for her to open Christmas morning...

I bought a set of face masks from Reutter Porcelain but needed them on a stand so I could decorate them in Mardi Gras fashion!


I know the necklaces will probably not survive the trip to TX, but if she can salvage them enough to use them somewhere in her scene, it'll be a success in my book! 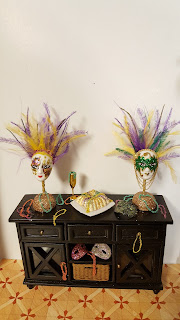 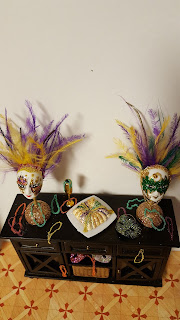 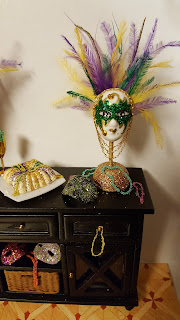 So that's it for this year's holiday homemade gifts!  I hope all of you (all 4 of you who read this! LOL) have a peaceful, wonderful, holiday!
Posted by Lori at 10:48 AM 3 comments:

I Found a Name! (And it's Woodline)

And, in November, a fourth one showed up for repair!
But this customer had all the manufacturer's instructions and some other reading material about miniatures (including some catalogs from the 1970s or early 80s for Lynne's in PA)!
﻿
So this style house is called the Victorian Doll House by Woodline Products out of Illinois. 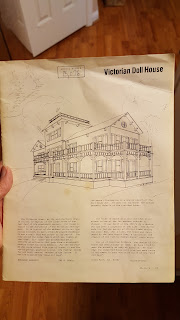 Now that I had a direction to google, I have found some other Woodline Product houses with the most popular being: 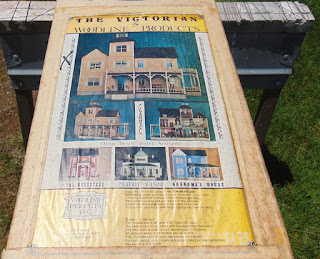 Not certain if you can see the other houses offered so here's another image of a kit up close:

That's that.  Now I know who made these houses I keep seeing and what they are called.  And now you do too.  Lol
Posted by Lori at 6:33 AM 3 comments: