So last weekend I got to take a mini vacation!  Literally and figuratively!  It's been two years since I've attended the Dallas Miniature Showcase (Dallas Mini Show 2016 Adventure) and the show has a new promoter so it seemed like a good excuse to go crash at my BFF's house in Texas and have a fun girls' weekend!  (This is a long blog entry, but there's a lot of pretty photos of miniatures so I recommend you stick with it! LOL)

My friend and I spent some time playing with her miniature projects, from electrifying a dollhouse baby house (1:144 scale) to shingling her toy store and shingling a Greenleaf house she is donating to a good cause, to laying out her future projects (her hunting lodge, a Harry Potter scene for her nephew, her bakery, and her oriental scene); we accomplished a lot in a day and a half! She also demonstrated scenic grass for me (more on that later in this blog).

The new show promoter also had out several tables for people to display their creations they've been working on (to motivate those of us low on inspiration lately).  My BFF displayed her Tiki Hut Cabana (2014 Post about Tiki Hut) and a Truck scene (pics later in blog).  Unfortunately, due to the weather I suspect, not many people brought exhibits to share.
Marc Mead shared his display (sorry interior shots have a bit of a haze to them - that's the plexi and I kept getting a reflection no matter how hard I tried not to): 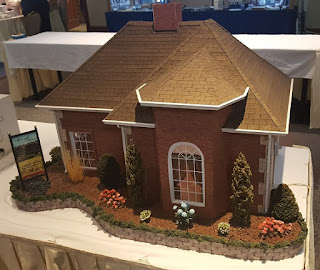 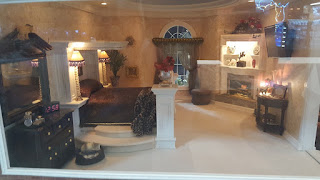 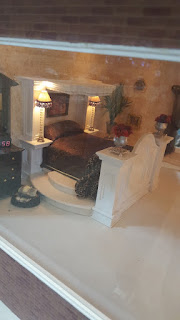 And Sandra (whose miniature business had a table at the show -- I bought little eggs from her 2 years ago) put out an exhibit as well -- I love how she filled the windows! 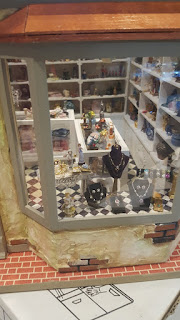 The local miniature club had out displays of their project they had worked on in a recent club meeting: 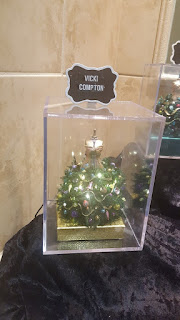 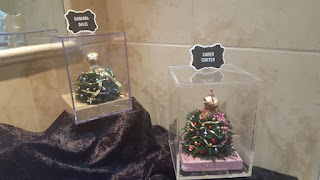 I loved those so much I'm thinking I'm going to make one too!

I'm not sure who brought this exhibit (there was no name on it) but it was breath-taking! 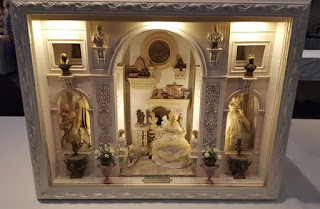 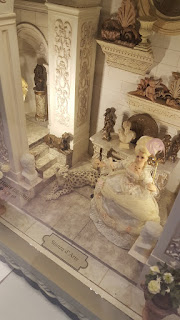 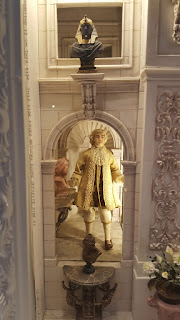 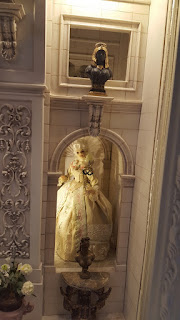 Simply stunning!  I'd love to know if the person who created it made it in a class (I do recall an advertised class to create a box similar to this) or if s/he came up with the design themselves!

I also took random photos of some things I loved but could never afford (LOL): 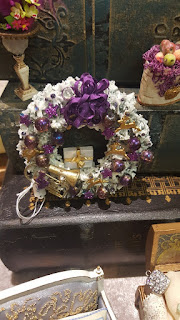 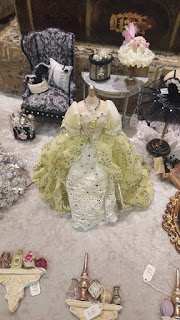 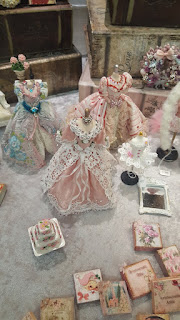 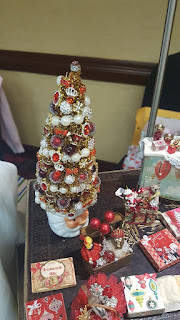 Wilson from Dollhouse Linens & More (will55@windstream.net) had so many beautifully dressed beds and dining room pieces! 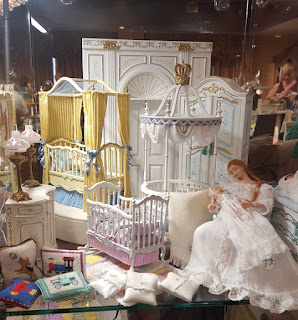 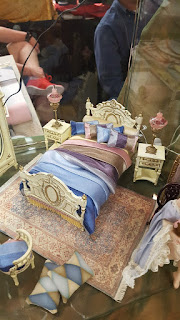 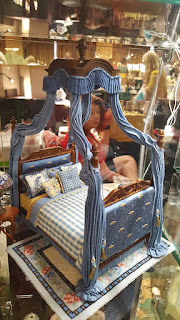 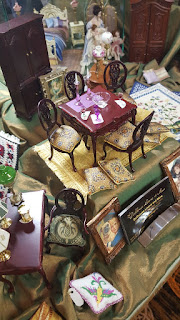 Dollhouse Land (lauracrain2@aol.com) had some lovely...Shabby Chic? Country French? How about I just say "lovely miniatures" because I'm awful at identifying decor style! My favorite doll dresser Tish of Versailles Fashion Dolls (tishtierney@yahoo.com) had a table (and yes, a doll may have ended up coming home with me)...


Sir Tom Thumb (pkinney@miniaturewoodcreations.com) had some interesting miniatures...if it exists in real life, it's available in miniature somewhere! LOL.

I'm not sure whose table this was (Miniature Designs out of GA, maybe?) but someone brought this to sell:

I bought these goodies from a New Zealand business, Tiny Finery (janisaham@gmail.com; Tiny Finery's Etsy shop however she admitted she doesn't put much up in her Etsy shop and it's better to just email her):


And then there's this little piece...
I know to you it looks like a clown toy (and that's all it was to me too when I first saw it and debated about buying it for my Mansion's nursery shelf).  But this little clown has a sweet story.  Most other items on this artist's table were more expensive than I wanted to spend so I assumed this little un-priced toy would also be expensive, but I kept going back and picking him up to look at him. A member of the local mini club was standing there purchasing things and noticed me constantly going back to look at the clown.  So she asked how much it was and proceeded to put it on her bill and then gave it to me! She something along the lines of, "If you go back to something more than twice cuz you like it, then you need to own it!"  I was speechless -- how wonderful that there is such a generous, kind lady out there in the world!  I'm certain my socially awkward "thank you" didn't come out sounding right, mostly because I stuttered something about thinking of her whenever I looked at a clown.

Some other goodies I got from various vendors/artists:

And now for a collection of photos of my BFF's work (she makes incredible scenes!).  She has them scattered around her house:


And, the best scene (in my opinion) that she's created in the last few years is this roadside stand Flower Truck:

So this incredible Flower Truck scene was made for ME!  It was my Birithmas (Birthday and Christmas smashed together) gift!  She made it in secret -- I didn't know about it until after she'd finished it!  And, just like all those tiny books she made in her bookstore, she made ALL those flowers, one at a time, out of paper and wire!!!  Every. Single. Flower.  She also made the dark wicker basket on the far left. You all probably had guessed she had the patience of a saint since she puts up with me as a BFF.  But here's tangible proof (of either her patience or her craziness).
So, yet again this weekend, I was rendered speechless and blown away by another person's kindness (and talent, in this instance)!  It is absolutely stunning!  But I couldn't resist playing with the frolicking dog...
And here's that static grass I mentioned earlier...

...she told me that static grass was what she had used to create the varying height grass in this scene so I wanted to see what was involved in using it because my hunting cabin and Irish cottage will need landscaping!  I am hoping to landscape the hunting cabin this summer so there will be an in-depth blog post about it then!
After the show I have so many more ideas and things I want to try (from furniture making to landscaping)!  And I bought a few items for my colonial kitchen so I may pull out that roombox and finish it finally!  We'll see -- so far all I've done since being home is unpack my suitcase, wash all the dishes/laundry my family left for me, and I'm still trying to get caught up at work (lots of people want estimates to have their dollhouses fixed up!).  We'll see what the next few weeks bring...
Posted by Lori at 8:56 AM 4 comments: