Elephant in the room

So, years and years ago,  I bought this wonderful little elephant and two years ago I purchased this Indian couple to go with the elephant... 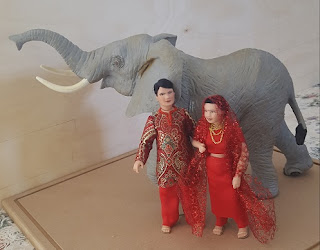 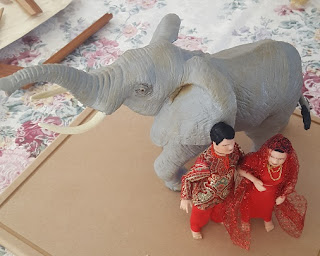 And I knew that eventually they would become a Hindu wedding scene.  But I needed the right fabric and other projects got in the way.  Until Monday when I decided to quickly finish up this little scene.

For those not familiar with North India, West India, and Pakistan weddings, the Baraat is the tradition by which the groom arrives at his wedding.  It is the start of the wedding celebration! There is singing, dancing, laughter, and for transporting the groom to the ceremony there is either a horse, elephant, or fancy car (in modern times as horses and elephants are harder to come by in some towns/cities).

I didn't want to make the whole Baraat procession because that would involve a lot of dolls to represent all the groom's family and friends, plus the musicians. Plus my bride already had her Bindi (the red dot on her forehead symbolizing a married woman's commitment to her husband and marriage). So I decided the ceremony was over, but the Baraat Elephant was still there for photos.

Created the seat first.  The groom (and in some cases, a younger brother/nephew) would sit in the seat as the procession moves thru the streets.  Using balsa wood I made the seat to sit on the lumpy elephant's back: 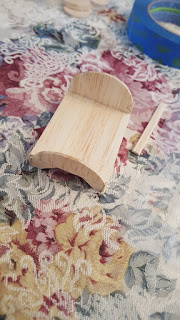 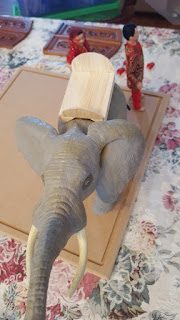 I covered it with fabric and started to make the draping for the elephant's back.

﻿
Next up was the elephant's head dress...simple little diamond shaped fabric and a jewel sticker my friend found at an egg show and mailed to me. 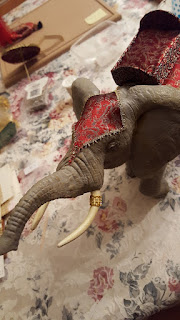 Next they needed an umbrella to protect them from the bright sun glare...I used one of those paper drink umbrellas:

So now it is all "done" (okay, it's not really done, it's just "now presentable" like the New York Roombox).  I just have to fuss with some minor landscaping.  But I'm pleased with my day of playing, er, I mean, working:


A bit hazy from the plexiglass it's under, but rough draft walkway for the elephant is planned and I've picked a few plants but the scene needs something more.  I'm toying around with some terraced landscaping behind the elephant (where tall tree is) but I am open to ideas/suggestions!  Especially to the right of the couple!  Thanks in advance!
Posted by Lori at 12:04 PM 2 comments:

It's done!!! My New York Shop Windows Room Box is done!  Well, basically done; just needs some boxes under the Tiffany tree, and some more garland and "Merry Christmas" sign in the Teuscher window, and I still have to print out the Broadway posters for the frames (current ink cartridges are low so posters aren't printing out as nice as I'd like them -- have to wait until printer ink is changed)...Okay, so it still needs more work. But it's presentable now. ("It's presentable now" doesn't sound nearly as exciting or as dramatic as "It's done!".)

Last minute add-ons to the room boxes:  I added some reindeers to Tiffany's window.

For those of you who noticed there are only two reindeer in the Tiffany window, but there had been three in the package: the third is hiding in another window.  It's like Waldo.  Have fun looking for him! LOL

And the Teuscher Chocolatier shop window needed something on the back wall...the original real life window has an over abundance of ornament garland on the back wall:
But all I had was a piece of garland that I fashioned into a skinny wreath.  It was looking weak. 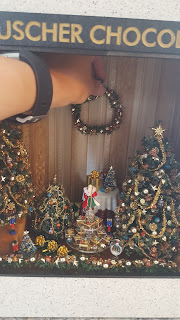 So I added some greenery sprays and ornaments to it until it was properly over-the-top dripping with stuff.
Teuscher side will still need some more garland on the back wall, hanging from the crown molding that is just out of view.  Two more packs of garland are on order and should arrive in mid-Sept.

So this project is "presentable now"!  Here's a video of it:

Loving it "at night" too, especially the Tiffany's windows:


Or, if you'd prefer, photos of both the real life and the mini versions of New York shop windows decorated for the holidays...

﻿
The final wall had no "real life" version; I was just looking for something "New York" and brick buildings and Broadway jumped to mind.﻿﻿
Got this done just in time to claim it as "Christmas in July"!  Hope you enjoyed it as much as I do!
Posted by Lori at 6:18 AM 5 comments: