Mother Nature listened to my request (sort of): I asked for another snow week and she gave me a snow day.  Close enough!  It was enough to get me started on my Library's Lower Ceiling.  I started by making a template of the ceiling space (I love templates that allow me to work outside the dollhouse).  I wanted something mostly white (so as to not detract from the main focal points in the room, which are the bookcases and Second Story Ceiling).  But a plain white ceiling would have been, well, plain.

So to coordinate with the larger, grander, Second Story Ceiling (Library Second Story Ceiling) I had picked out these panels by North Eastern Lumber (a different company than North Eastern Models which I am sad to say is closing it's doors after 70 years in business!) and I had planned to put them straight across the ceiling like so:
But, with the floor being so busy and the bookcases having a lot of different books (thus appearing busy to the eye at first glance), I was worried that this would be too busy of a ceiling, even if it were just painted white.  Plus my late night decor consultants (Mom and my best friend Julie) advised that lower ceiling should have a touch of gold to it to coordinate it with the room better.

My major concerns with the dry fit was that the front edge (which is seen from the open end of the dollhouse) was not trimmed out whereas the back (which is mostly hidden by the fireplace and bookshelves) was neatly spaced.  So I removed the trim from the back and moved it towards the front.  And I laid the crown molding on it to see how it would look with the spacing. 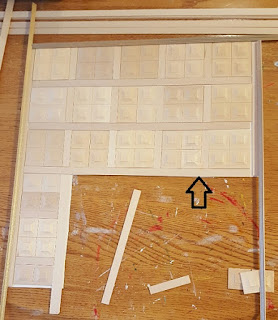 My decor advisers still insisted the ceiling was too plain and trims were needed.  Get me some gold trims, STAT!  So I experimented with different woods and settled on a flat chair molding.  I would box in each 4x4 panel (similar to the Second Story Ceiling) and create a grid network across the ceiling.  But how to meet up the edges of the grid?  I could just butt them up flush to each other (quick, simple, easy) or I could cut each strip into 45-degree angles (time consuming but looks more finished):

I really liked the mitered cut look so that is what I did.  Until I got to the edges of the ceiling. 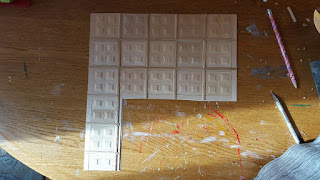 The strips fall off into nothing.  How do I bring the strips to an end?  I tried notching out a piece but it looked horrible (didn't even photograph it) as the angle cut arrow edge strips didn't fit nicely into the notches I had made.  I tried just bringing the strips to the edge and cutting it flat: 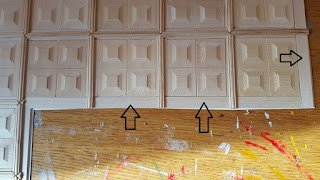 But it looked unfinished with those gaps just sitting there (pointed out by the arrows in the photo above).  I tried cutting small knobs to anchor the strips into a longer strip, but they looked like little pimples on the trim: 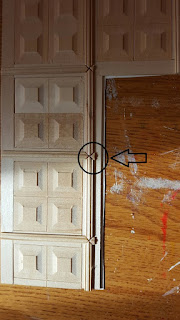 Decor Consultant Mom recommended framing out the ceiling with the flat chair rail but don't angle cut any of the framing -- only butt up to it.  So I tried that and it looked good enough that I went with it! 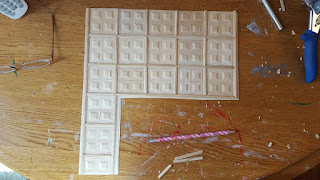 Now that I was fairly content with my dry fit, I removed the trim pieces and painted them gold (along with the crown molding), glued down the panels and strip wood, and I spray painted the ceiling white:
Gave it 2 coats and then thought it couldn't hurt to have a 3rd coat.  What a mistake.  Because either the 20-degree weather outside where I gave it a quick spray for the 3rd coat or because I was rushing (due to the cold) and sprayed too close to the project, but ripples and bumps appeared in the paint in numerous, various, places on the ceiling about 15 minutes after I sprayed: 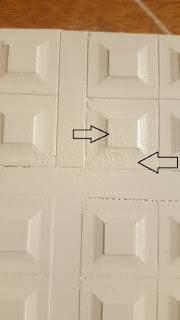 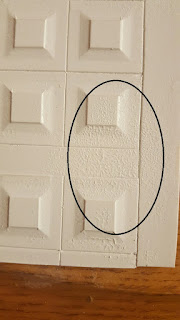 They were very faint and I considered just going with it.  But I knew eventually it would bug me.  So I took out very fine sand paper and a bottle of paint thinner and got started removing the imperfections.  After a bunch of scrubbing with rags dipped in paint thinner and lightly sanding spots, the majority of the ripples/textured spots were gone and the ceiling was ready for another, final coat of white paint. 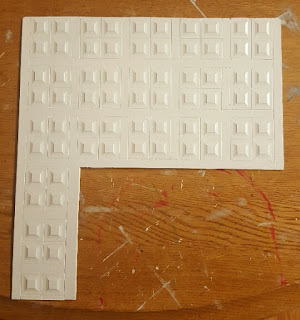 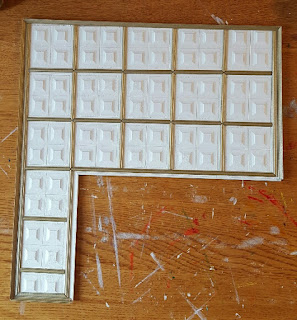 It was ready to be officially glued into the Library! 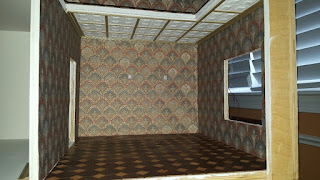 It is a nice little ceiling that would have been lovely for a cozy, yet elegant, room.  But this room is not just a cozy little elegant room: it is a two story library so....

I am now gluing on the "wrought iron" railings and spiral stair.  Then baseboards and bookcases/fireplace get returned to their spots.  Eventually windows and window trim will be inserted and curtains made and this room (rooms?) will be done!

Thanks to Valentine's Day and President's Day (no school for the kids), I was also able to fit in time to do the Kitchen floor and crown molding in the Lady's Sitting Room:
My servants' areas will have terrazzo floors.  Terrazzo (invented by the Venetians in the 1500s) is a cement based floor made by embedding small pieces of marble or granite in mortar and then polishing.  Or, like they did at the Elms in Newport, even crushed sea shells and pebbles can be used in the mosaic-like topping of the floor. At first I was going to spray paint the floor with one of those stone looking sprays and polyurethane it to look like terrazzo.  But then my sister gave me a roll of some contact paper drawer liners she had purchased for her new townhouse, and PRESTO! My servants got a quick and easy terrazzo floor for the kitchen, servant's dining room, and laundry room!

I have been avoiding putting the 4th floor on the house because the angles of the bay rooms have intimidated me.  I had flashbacks to my attempts to put crown molding in the customer's Harborside Mansion (Crying Over Harborside Mansion) so I wanted to be able to see all around the angles and crown molding while cutting and fitting them.  Therefore, the 4th floor has never been glued onto the house.  But, of course, since I planned this out so carefully, the trims cut without issue and fit great: 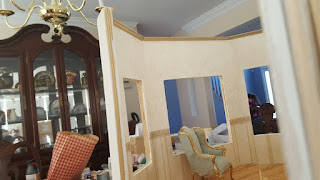 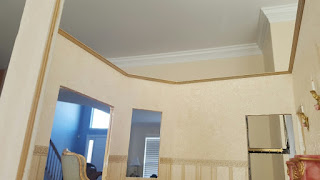 So...updated photos of the library (once baseboards, rails and stairs are glued in and bookcases are returned) will be posted in the near future.  But for now, I'm taking a hot chocolate or coffee break!  Thanks for the snow, Mother Nature!
Posted by Lori at 11:19 AM 3 comments: