Last year I was so busy closing up the shop that I didn't have time to make my friend her Birithmas (mix of Birthday and Christmas) gift.  I knew what I wanted to make her; I had even bought most of the supplies to do it in early 2019.  I just didn't have the time.

Several years ago I made her THIS (click to read blog post about making the box) for Birithmas:

When I gave her the box 3 of the sides had been decorated. Side 1: Tiffany & Co was painted and designed - my friend just needs to fill the window with jewelry and stuff.  Side 2: We contacted our friend Tish to make a doll for the Queen of Heart's large window display (Link to Post about Other Large Shop Window).  Side 3: And the flat side of the box had been decorated with Broadway Show posters.  Which only left this one window left to be decorated.

So I wanted to replicate something similar for her in miniature.  Plus add a few touches of my own (the miniature window is slightly larger than the real life window so there will have to be more in the window than just the dress and gift boxes).

First up was a reindeer that my friend was giving away.  She got this for a project and then didn't use it.  So I told her I could use it (she didn't know it was for her own gift):

So once I glued lycopodium to him to fill and fluff him out, he started to look more like a dog than a reindeer!  I was so disappointed and lost my momentum for working on the project.  He sat around my dining room table for a month or so, my little reindog.
Then November hit and I realized I hadn't even started the other projects that would go into the window scene and I was going to miss out on getting my friend a Birithmas 2020 gift!!!  Unacceptable.  So I dragged Reindog out and contacted my friend's mother for advice: keep Reindog as a dog (friend loves dogs!) or bite the bullet and glue antlers on him and hope that converts him back into a reindeer?
He still looks a little doggish to me, but friend's mother says the antlers make him look enough like a reindeer. (The antlers were cut off of a rubber/plastic reindeer toy.)  But it wasn't quite enough.  So I increased his reindeer-ness by adding some Christmas decorations to him:
Project #2 for the window scene is a shelf unit filled with goodies.  However, I wanted friend to put some of her own style into the window scene so I only added a few items to the shelf (which she can move around, take out, or glue down once she decides what she wants on the shelves).  I added some "garland" (sparkly pipe cleaners) to the edges of the shelves and it was done:
Riding high from that success I jumped right into Project #3: The Lamp Post!
I had various bits and pieces that would dress this up, such as more sparkly pipe cleaners, ornaments, flowers, and...

I made the sparkly reindeer from a brown plastic railroad accessory.  Spray painted him white, smothered him in white glitter, and glued no-hole-beads to his antlers.  It was like a pampering day at the spa, sort of.  So I glued my bits and pieces to the lamp pole:

Now came the main attraction: the Rose Dress.  I was scared to tackle this project due to my Past Experience with dressing dolls (and really a mannequin is just a headless/armless doll!).  Dedicated a Saturday afternoon to it and came up with:
So, it took me three different design attempts and there were some glue spots on the fabric that I'm not happy about, but this was an acceptable start to a bodice and my patience was stretched thin.  Time to stop for the night (which became a week).
A week later I forced myself to try the skirt part.  And, like the bodice, it took me about 3 or 4 design styles before I got to something semi-decent enough to glue to the mannequin.  It did not help that apparently I like fabrics that look pretty, but are a pain in the butt to glue and sew (yes, one version of the skirt involved my using a needle and thread!).
Had a 2 or 3 hour debate over how to join the side skirts to the back skirt.  Only solution I could come up with was to glue over them to keep them together.  So I glued the only coordinating ribbon I had over it (a black and gold ribbon) and thought, "I can't give this to her; it looks sloppy with weird trims/ribbons on the back that won't match the white trim in the front, odd size arm holes, uneven seam and hem lines, and I haven't even attempted the roses yet".  I wasn't going to cry, but felt despondent enough over how it was turning out that I wondered what gift I could just buy for my friend because this dress wasn't looking good enough to give to her. Then my eldest walked by the table and said, "Did you make THAT? It looks nice!" And just like that my confidence and momentum returned!  Sometimes all it takes a compliment to keep you going.
So I glued white bunka trim to the front of the dress:
And cut some red aida cloth to fit the front of the skirt for the roses...
Now that dress is done, I had to work on the blanket of flowers at the mannequin's base.  I wanted the blanket of roses to be separate though because 1. that will be easier for shipping this from Virginia to my friend in Texas and 2. the dress was looking so nice, I didn't want to screw it up with the blanket of roses looking badly so if it's not connected to the dress, I could still ship the dress to my friend and feel like I had a respectable gift for her.
Glued some foam to a piece of cardboard (to get a "rolling hill" effect like in the photo).

I started to glue roses to the foam (just left of center in the back by the dress) when I realized that I should paint the foam red in case there are gaps!  After painting it red, I started to glue the roses to the foam.  And then I started to hyperventilate since I THOUGHT 150 roses would be enough, but I was running out!  I stuck some larger roses in that were "red" and not "deep red" like the other roses but I couldn't think of what else to do.  And now the edge that was supposed to be covered in roses, was just a raw foam edge because I was out of roses.  I debated about covering the edge with a strand of the sparkly green pipe cleaner garland (that would coordinate the dress to the other pieces in the scene) but I really didn't want to do that.  Then youngest asked, "Why can't you just cut off the excess foam edge and paint what remains red?"  Brilliant!  Simple solution!  Can't believe I wasted 2 hours brain storming this and the solution was so simple!  Thank goodness I have smart kids.
So the scene is now complete and fits into the window space (I had a template of the Large Window Shop so I knew exactly how much room I had to work with)! 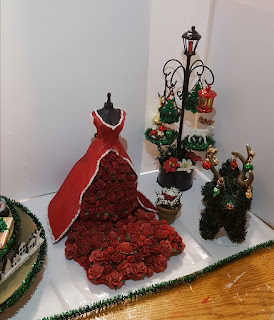 It's the first week of December and all the gifts are wrapped and packed for shipping and by the time I post this she will have opened them (can't post until after she opens in case she reads the blog before she's opened her Birithmas Gift)!  Took me 2 years, but I finally finished her rose dress!
Hoping you all are having a rosy winter!  Stay safe everyone!
Posted by Lori at 8:49 AM 1 comment: