It all started when a customer brought in a dollhouse that she thought was custom made. I had worked on one before so I doubted the "custom made" label. But I had no information to offer the lady as my google searches did not reveal any pictures, details, or manufacturer name for the house. Eventually, after working on the same style house four different times for four different customers, I discovered it's manufacturer/name (Woodline Victorian Dollhouses)! And I began to wonder how many of the previous homes have I worked on have been custom vs. manufactured?

Here are some past dollhouses that I've worked on that I did not know at the time what they were....But I know now, thanks to this (new-to-me) 1980 catalog book: 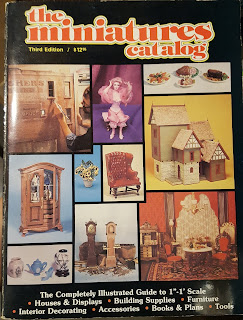 This one we worked on twice and although I suspected it was a Walmer, I now have proof:
We wallpapered this for a customer, and now I know it was called the Plumbrook Cottage (plans sold by Plaid Enterprises):

This Townhouse was in twice (first to fix electrical, then again to install the hinged exterior panel that son had broken off of house): 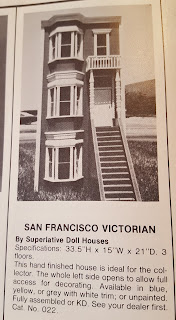 It does appear as though the front door was replaced with a different door and that balcony above the front door is slightly different than the one pictured in the catalog book, but I do still think it's the same house.  Or maybe a later version of this house from the Superlative Doll Houses company.

The next house looked similar to Walmer's Brookshire... 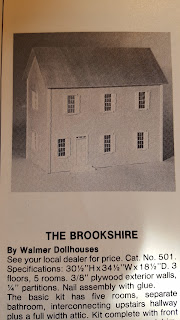 But it had a mansard roof:

Thanks to some google searching, I was able to determine it is a Walmer dollhouse that was called Old Town (also found it spelled Olde Town too).  But I could not find it in my 1980 catalog so I think it must be in one of the earlier or later catalogs (I will have to track down all the catalogs over time :) )

And, as fate would have it, we have two houses in right now for renovation/repairs that were from the same kit. They are the Duracraft Farmhouse 500.  (Not to be confused with the Dura-craft Farmhouse 505 which looks similar but has the front door on the front of the house and 2 single windows instead of double windows).
I will continue to identify houses I've worked on as I recognize them....
Posted by Lori at 10:12 AM 4 comments:

Late last year I came up with an idea to create multiple holiday scenes. But it was holiday season and I had no extra time to do any miniatures. So I dreamed, schemed, and took notes...and now it's time to create/play!

I want to create 6 (or maybe more...we'll see if it grows beyond the 6 in my head) different settings decorated for the season.  And it works out perfectly because I have 8 plexi-covers I'm currently not using so they can cover the scenes!  (So, yes, it can grow by two more scenes! LOL)

My first inspiration came from a friend's Facebook post of her awesome real life living room:
And, as luck would have it, I had recently come into possession of this NAME project someone had put together that looks very similar to the built-in in my friend's picture.  This was gonna be an easy-peasy, super quick project! (HA! Famous last thought!)
So I think all 6 scenes will have common things: all will be the same size space, with 2 walls (a back and side wall) and a floor, a fireplace of some type, all will have a reindeer somewhere in the scene, obviously greenery and candy of some kind (chocolate or candy canes), a seat or sofa, and a window.  This first scene would be the "city Christmas" scene - with the built-in TV cabinet to replicate my friend's living room.

When I was first brainstorming, I thought the window would go on the back wall.  However, the cabinet is too long for the side wall so the cabinet HAS to go on the back wall.  But if I am putting the TV in the center nook of the cabinet to replicate friend's living room, I'll block the window that was planned for the back wall.  Where would the window go?  So window got moved to the left wall.  And now I needed to find a scene for out the window...This is beginning to sound like a miniature version of "If You Give A Mouse A Cookie" (If I use the NAME project cabinet, I have to remove the window seat and raise the counter for a TV. If I put the TV there, I have to move the window.  Once I have the window in place, I need a scene for out the window.  Now that I have a TV cabinet along the back wall and a window on the second wall, where do I put the fireplace?)  I need a cookie now.
I really wanted each scene to have a fireplace of some sort.  But with the cabinet taking up the entire back wall and the side wall dedicated to a window, there appeared to be no more space for a fireplace.  So, as you may have guessed, if the TV is up on the cabinet, why can't the fireplace go underneath?  This is a city apartment so they wouldn't have wood burning fireplaces; but they could have an electric or maybe even a gas-operated fireplace!  Flip a switch and instant fire.


Unfortunately I still wasn't happy with the scene.  The TV still looks too low and there's too much dead space above the TV.  And flames need to be longer.  And I definitely need more cookies.
Found an old fireplace fender made out of flexible thin metal that I could cut with scissors!  I could put this under the fireplace, helping to raise it up, and it would look like those fan grates that circulate the warm air from the fireplace! 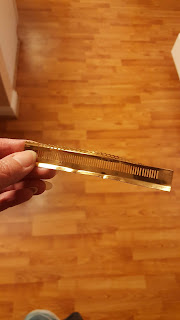 Got longer logs and tested it with the higher height...
Added one more shelf and now I think it looks right...
Now it's all painted and I can start to add the Christmas décor (which I still have to make).  And I decided on a window scene and using spray adhesive I attached it to posterboard (so if I change my mind I can slide it out and change it). 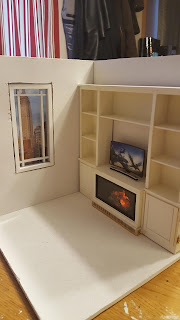 And I had to replace the solid bulb that came with the fireplace with a flickering LED light so it would look realistic:

So my quick, easy-peasy project took over 2 weeks and I'm not even half done (as I still have to wallpaper, paint window trim and the small side table to match the cabinet, create curtains, install flooring, find/make all the remaining accessories, etc.). But at this rate, I may actually finish this 6-part (or more) project in time for Christmas 2019!
Posted by Lori at 8:28 AM 3 comments: