Found some time to wallpaper!  So Cluckers was papered one day...
The next day I stained flooring (those veneer flooring sheets by Classics and Houseworks) and turned them sideways to be ship lap up behind the shelves that will hold the "flair":
Had to trim out the window cuz I hated seeing the glue globs where the glass was attached to the outer wall...
Still have not found a good Cluckers's chandelier.  Had hoped to buy some glass chickens and put a light bulb between them to light them up and call it a chandelier, but the chicken arrived and it was quite large.  So it became Mother Cluckers's mascot and will have a place of honor above the door. 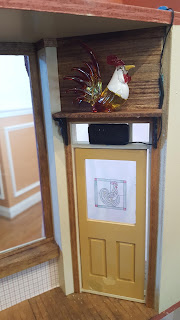 In the meantime, I spray painted the back kitchen area silver. 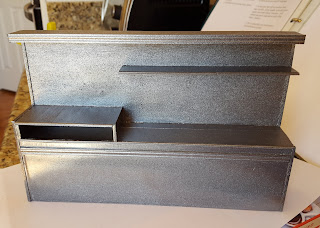 And stained the narrow back counter that will have the register and take-out bags on it.

I used the American Chestnut Stain and Polyurethane All-in-One stain (as it matches the Bespaq New Walnut stain color of the booths and front counter; however I gave the counter two coats and I should have just done one so mine is a tad bit darker).  When I first opened the stain it had separated (the stain was gloopy on the bottom of the jar and the poly was on top).  But before I stirred it up, I dipped my brush into the top of the stain can and put a blop of the slightly stain-colored poly onto a paper plate along with some watered-down yellow and brown paints.
My silver kitchen was way too clean where the grills would be...so I had to add some "grease" and food residue to the back wall.  Using a soft brush I smeared the light brown poly over the silver.  Once that had dried I used a stiffer paint brush (almost resembled a toothbrush) and dipped it into the yellow and brown paint washes.  I'd flick the bristles over the paper plate first to get off the larger paint clumps/drops and then I flicked it over the grill area.
I think it turned out pretty great.  It probably needs more down the front of the cabinet to be realistic, but I'm gonna pretend like the cook's apron keeps the front of the kitchen grill cleaner. LOL 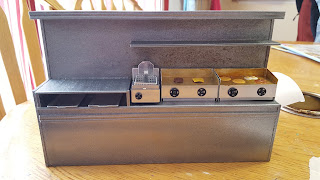 I added a strip of LED lights to simulate a plate warmer for above the grill.
I still need to glue all the chicken and rooster "flair" to the shelves.  Kitchen still needs more supplies (plates, mugs, glasses, etc).  And I have to make (or find) a soda dispenser machine to fit that space next to the coffee maker and I want to design and print off a logo to create take-out bags.  But those two projects, like the chandelier, can be on-going tasks for later in the year.

But right now I'm in the mood to start my next project(s)....all the cold weather and snow we've had these past two weeks has me thinking of the winter holidays.  I know, I know, I 'm about 3 months late (I'm always late), but I was too busy around the holidays to do any new holiday-related mini projects!  But I'm ready to blast the carols and eat candy canes now! Check back in a few more weeks!
Posted by Lori at 8:11 PM 6 comments:

Email ThisBlogThis!Share to TwitterShare to FacebookShare to Pinterest
Labels: My Animal Themed Projects

This project started out as the Raw Chicken Country Kitchen: a little diner that served mostly breakfast foods, such as eggs (raw chicken = eggs? not really, but, whatever, I'll think about that later). This chicken-themed diner (to accompany my whole "street" of animal themed shops) was a small space so I wanted to give the illusion of a kitchen without having to create an entire restaurant kitchen.  I printed a lunch counter scene off of Google and thought it would work framed out on the back wall...
I also took out all my chicken themed stuff and had the realization that a lot of it was rooster related.  Thus the Raw Chicken Country Kitchen became the Raw Rooster Country Kitchen.  (Wait, do roosters lay eggs?  Hmmm, no.  So not sure that Raw Rooster is a good name....oh well, I'll think about that later.)  Framed out the kitchen scene to focus strictly on the pass-thru section...
Yuck, no.  It's really small (1" x 3"), which I liked at first because I wanted the viewer's eye to focus on the diner (booths, foods, chicken themed items on the shelves); I don't want people to stare at the kitchen pass-thru.  But I felt like this small view of the kitchen almost invites people to stare at it and wonder why it's so small.  Even if the frame was painted silver (as I feel like most of those are silver) I think it looks like some weird photo the restaurant owner decided to have framed and hung on the wall, and not like a kitchen pass-thru.

Friend suggested I just put a faux door to give the illusion of a doorway to the kitchen.  But that wasn't thrilling me either. Then came the light bulb! It is a small diner: only 2 booths and a lunch counter for 3.  They would have just a small kitchen.  So why don't I create one on the back wall?  Last night I gathered my supplies...
Started cutting.  Made basic shape...
It still needs sanding and to be spray painted silver, but it's looking decent!  Also, the name (Raw Rooster Country Kitchen) was really bothering me: eggs are not raw chickens nor do they come from roosters; so instead, no matter what name I use, it sounds like the diner serves uncooked meat or something.  Changed it to "Crazy Chickens Country Kitchen" which is surprisingly difficult to say.  Plus the decor has all sorts of poultry themed items: roosters, chickens, hens.  So neither "Rooster" nor "Chicken" Country Kitchen is going to be 100% accurate.  I know, I know: I'm really OCD'ing and overthinking this.  Who knew naming a place could be so involved?  LOL.

Then Friend saved the day with "Cluckers Country Kitchen", or as we have begun to nickname it: "Mother Cluckers".

So counter is in place and filled with some diner type items... 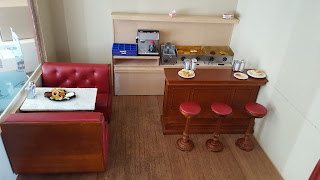 Blue Pepsi crate is a space holder for a soda dispenser I will have to make or find one to purchase.  And I need to get some mustard and ketchup squirt bottles to go next to the napkin holders.

This roombox is a front-opening shop that had a shelf connected to the front window.  I spent one evening during the week removing that shelf so a booth set would fit in the space instead:
There is some dead space behind the booth and next to the cooking counter.  Will put a narrow counter back there with a register and to-go bags (for the diner's booming take-out business).  Waitress/Cook better be skinny to fit between the booth and the counter - s/he will only have about a foot of space (1") to squeeze thru once counter is in place. LOL

So Mother Cluckers still needs a lot of work before she's ready to open for business.  Back counter needs to be painted metallic silver; narrow counter and soda dispenser needs to be purchased/made; walls need to be papered; and top 2" of the walls will get a shelf for chicken/hen/rooster themed stuff to decorate the diner (I believe it is called "flair").
And, most importantly, I need to address the electrical components: I have to make the chicken/rooster themed chandelier and wire in the LEDs to the back counter to be the food warmers.  So we will visit this diner again later on in the month!  Until then: Thanks for stopping by! Come back again soon!

(P.S. Please note my extreme restraint: there was not one pun made using the word "egg" or egg-related terms (such as "scrambled")!  Aren't you all so proud of me?)
Posted by Lori at 11:47 AM 6 comments: