Still working on my various projects to get them completed (or as close as possible) before the FROGS holiday open house on December 4th.

This blog post is on my "1964 Kitchen". The box and kitchen cabinets were finished years ago. I was lucky enough that my friend Audra assembled and painted the cabinets for me. I was then lucky enough to find some groovy Itsy Bitsy papers for the walls and floor that matched the cabinets!  And my luck was holding strong as a major miniature manufacturer came out with those wonderful Saarinen Tulip chairs that were popular in the late 50s/early 60s. 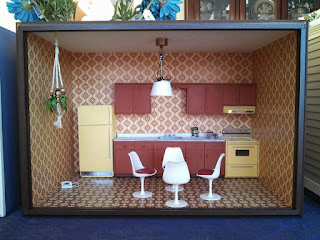 But then my luck ran out as I could not find a matching table for years. Poor kitchen sat neglected. I wasn't even motivated to put accessories in the room.

Finally, a few months ago, I found the table! And I could finally move forward with accessories. I had to make a draped towel to cover the missing drawer handle (did you notice the missing handle in the picture above?).

Using a piece of fabric, I dipped it in a water/glue mixture.  Then I pinned it into shape on a plastic-wrapped styrofoam block and let it dry.  Once dry, I plucked it off and put it on the countertop.

I polled my Facebook friends for accessory ideas and someone mentioned the wooden forks and spoons that hung on walls in the 1960s.  I liked that idea and got to work making some:

So, why 1964?  This kitchen roombox is part of a series of roomboxes that I was making to teach my daughters about history (yeah, sure, it's a teaching tool, not just another excuse to make and play with miniatures): the roomboxes would portray kitchens from 1790s, 1895, 1929, 1964, and 2010.  Why 1929 and 1964 instead of round even numbers like 1930 and 1965? The answer to that is on the table:
Aluminum soda cans with easy open tab lids were introduced in 1964 by the RC Cola company.  (Coke and Pepsi wouldn't get on the band wagon until 1967.)  Such an iconic part of our world (a soda can) yet in 1964 it was a brand new novelty.  That fact blew my kids minds: aluminum cans haven't been around forever?!?!?!  There's a lot more history in this kitchen than meets the eye, but I won't bore you with the complete history lesson.  (Extra credit points for anyone who can guess the reasoning behind the 1929 year!)

So this kitchen is finished enough for the FROGS holiday open house.  There are some minor changes I will make in 2017 so I am not gluing everything down yet, but it is a complete scene now.

I'm so excited!  I'm putting (some of) my miniatures on display at the Friends of Green Spring (or FROGS) Holiday Open House in Alexandria in December.  This has motivated me to finish up some of my displays that were needing attention.  Like my Barefoot Barista beach stall (First post about Beach Stall). 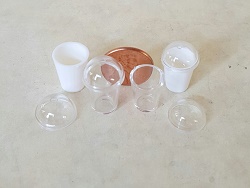 I love coffee so I knew this stall would sell coffees (hot and iced) and it might as well do teas and smoothies too.  Cups were holding me up.  I couldn't find any that were empty and looked realistic.  Until last month when one of my distributors got in a new product that were exactly what I wanted! (Where to buy the Super Cool Cups with Lids).  So my cups issue was solved!  Then came straws and stir sticks.  While I was trying to decide how I'd arrange everything and where I'd find straws, my daughters started pestering me to remove the tags off their new pajamas we had bought.  And presto: there's my straws!  And the red tag ties could be cut into stir sticks!

So I arranged my coffee maker, urn, blender, various coffee and tea boxes, cups, and various smoothie accouterments onto the shelves.  I still needed the "Starbucks Condiments" though.  You know, the numerous things you can add to the coffees: milk, creamers, spices, sugar, and stir sticks!  So I set out to make those silver thermos bottles and spice shakers...


I'm not completely satisfied with them (although I am tickled by the little holes on the top of the spice shakers: that turned out cute) but as a small detail on the counter I think they'll work fine.

Next up, the small fridge.  I ran into this issue before: I wanted a small dorm sized fridge for my hunting cabin, but could never find one.  Hunting cabin eventually got a full size fridge and my search ended.  But there was no way this little Beach Stall could handle a full size one.  So, what was I gonna do?  I could use a cooler.  But this stall is close enough to the boardwalk that plumbing and electrical sources have been brought to it (hence the coffee makers work).  So they would have a small fridge.  Toy box!  Turn a toy box on it's side and I've got a small fridge!

Now the Barista can not only keep the milk and creamers in the fridge, but s/he can sell sodas and bottled water now too! But how would customers know the stall sells sodas/waters?  The barista needs to advertise and create some impulse buying! So I spray painted a flower box and added some "ice", soda cans, and water bottle:

Now came my next bug-a-boo.  I wanted a small sink in this space.  Just something for the proprietor to wash the blender out with and wash their hands in.  But it really bugged my friend that the counter was shorter than any sink I put on it.  Even the smallest sinks hung over the counter edge.  Thanks a lot, Julie!  Now that's all I see when I look at the stall.  So, I had to expand the first shelf...


Now it's all together and ready for display! 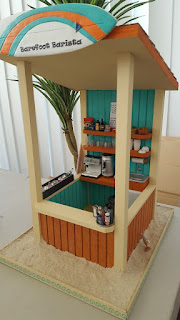 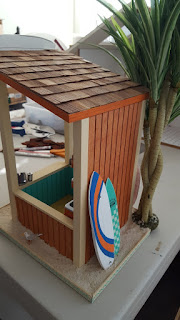 Now to fix up my kitchen roomboxes so they can be on display at the Open House too!
Posted by Lori at 8:43 AM 3 comments:

I've had this carve-able pumpkin for over a decade. I cut the design and then it sat for years and years...
I knew I wanted a scene inside with a sitting witch waiting for some trick-or-treaters.  But most witches are standing and the inside of the pumpkin was uneven and I was uninspired when thinking about what else would be in the pumpkin with my witch and her candy. So these very minor issues made my project sit unfinished for years upon years.

Then I became inspired when I made a dead plant with a spider hanging off it's branch and some bottles of "spooky" ingredients a witch might have.  I made these for a friend (and made some for myself as well). (Blog post about my Dead Plant with Spider.)  I glued them onto a shelf. 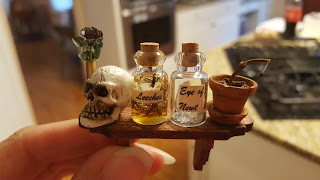 And, wonders of wonders! I found a sitting witch!  My favorite doll dresser (Tish's Versailles Fashion Dolls) has a sitting witch that I loved!  She was perfect!  I ordered her and got working on the floor of the pumpkin...

In went the Plaster of Paris to even out the floor...It hardened within a few hours as the directions had indicated on the Plaster of Paris box, but it took days upon days to fully dry out as the temperature kept dropping at night below the recommended curing temperature and I did not realize it.  While it was drying out I strung some bats to the ceiling.  The bats are rubber (where to buy the bats) so I could thread a needle with transparent thread and sew the little blood suckers into place:
I stuck an LED light in the pumpkin to light it up.  And eventually the floor did dry enough that I could put down a wood floor.  The wire for the LED runs under the wood floor and out a small hole in the back:
I added my shelf, my sitting witch, my awesome wood table I bought almost 10 years ago at the Philly Show, her candies and candles, and an extra chair that I thought the witch would sit on but then realized she'd cover up the incredible "spiderweb" back of the chair so it became an extra chair in the scene.  I put my pumpkins I made previously (although they are still missing their stems) around the exterior of the carved pumpkin scene along with an old tree I had purchased a decade ago.

But I really wanted my witch to have a carved, lit up pumpkin.  I tried to make one myself (Pumpkin Fiasco) but when that didn't work out the way I thought, I finally found a hollow, carved pumpkin on Etsy (Artistique's Etsy Shop) and decided it was worth the money to get it.  I then added the flickering LED bulb to it to make it light up!  Here's the video of my pumpkin in a pumpkin:
I was so excited to see my plan finished: it was exactly what I wanted!  (Like the music didn't give that away! LOL)  For those that don't watch youtube videos, here are the still photos, but the photos don't have the impressive "wow" effect for the flickering pumpkin or the lights turning off/on with a push of a button; but, at least you can see the final scene put all together:
A bit delayed in posting this (due to my kids' Halloween festivities and the subsequent clean up from those festivities), but Happy Halloween everyone!
Posted by Lori at 7:07 AM 4 comments: