I jump around from project to project so much that I sometimes think I might have ADD.  Except that I am utterly focused on whatever project I am currently working on; it's just that in a day or two I could be onto another project or created another new project without finishing the one I was just so focused on!  So here's a stream of consciousness update on what I've been doing these past 2 weeks....

Last week at work I electrified the little gray Bungalow Cottage by Alessio for a customer: 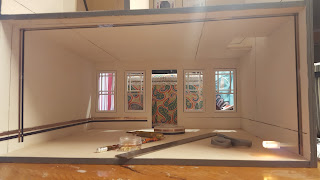 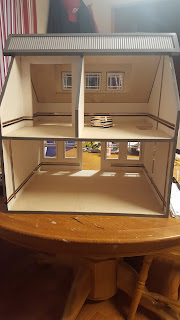 And, since it was Spring Break for my kids I dragged them to the laser cutter and tried to print out my Shoji doors for the Butterfly Garden (Asian Butterfly Garden Scene)..."tried to print out" is the key phrase in that sentence:
﻿ So, kids were not pleased with my laser-cutting-plan Spring Break activities, so when machine was too hot and warped my acrylic I did not take the time to review/search thru the settings to fix it.  I decided I'll buy the thin wood and try to cut the doors in wood next week.  In the meantime, this attempt did leave me with a bunch of these:

Not sure what I'll use them for, but I'm brainstorming.  After fun Spring Break activities during the day with my kids (ok, it was still boring for them: we just went to work at my mini shop) in the evenings I created a little something for a friend of mine who was creating a witch's workshop.
Using some scrap woods I made a little wooden box for some "witchy potion ingredients"...and used some of that clay I made on the stove (Blog Entry About Clay) to make the "ingredient" for the box:
I had such fun creating this witch-themed item that my mind jumped to all sorts of creations and I made other things so that I can create a witch's hutch or work table in the future to sell in my mini shop:

I really love spell #11 on my spell scroll:
And, once my mind was jumping with those creations, it of course went off in another direction (using all those breads I had created out of clay the past 4 months).  I glued a cloth "napkin" into a small resin basket I had in my stash.

But the majority of my breads were still bright white clay.  So I resigned myself to spending Easter mid-morning getting a few chalked to put in the basket.  But when I took out the chalk, brushes, and clay my children got excited and wanted to help.
I thought I would spend 1-1/2 hours getting two dozen chalked; instead, thanks to my mini helpers, in 1-1/2 hours all my breads were completely done! 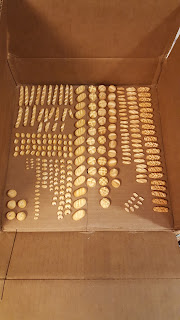 So I filled my basket and brain has already mentally created 2 or 3 other scenes to use my breads in. 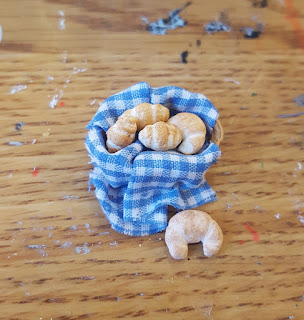 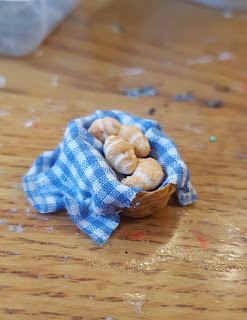 As long as the chalk was out I worked on my cakes too...which means my brain went off in yet another direction and another scene is being created for the cake (I'll share that in a future blog).
Kids are back at school this week and I'm back at work alone (i.e. actually getting work done this week!).  Customer came in and picked out the last room of paper for the red townhouse so it will get done this upcoming week: 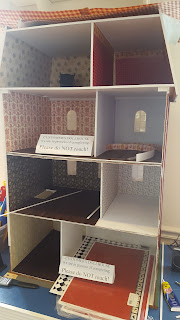 And this house (Customer's House) is getting it's front porch put back on and the interior is getting the wallpapers stripped:


And, because I can't sleep at night when I'm supposed to be, I also mentally worked on my Fantasy Victorian mansion and on my best friend's birithmas gift.  Oh, and I found the right fabric to finish off my elephant for my Hindu Wedding scene!  Yeah, I suffer from Miniature Addiction, but it's ok; I'm happy here.

So, it's been roughly 6 months since my water experiment (Playing with water effects) and it's time to check in on our water displays:
The lower left one seems cloudy - which became more noticeable in the direct sunlight: 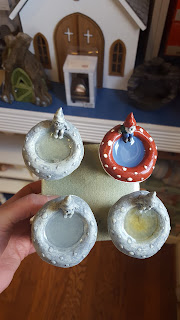 So, the lower left (Envirotex Pour On) definitely clouded up, probably from the massive amounts of small bubbles that formed when I had poured it into the birdbath, I'm sure.  But the surface is still glossy and easy to wipe clean from a small layer of dust (display sits on the counter near my work space so there is dust).  The painted birdbath was the other EnviroTex Pour On sample and it likewise is still hard, glossy slick, and the small bubbles that had formed when I poured are still there but not as cloudy or noticeable as in the unpainted sample.  But I think that is the painted bottom that is helping disguise the cloudy issue.

The Solid Water example (lower right in group photo) had reacted with the finish on the birdbath within moments of when I had poured it.  The marbleized swirls on the bottom of the birdbath still remain and, like the EnviroTex product, the surface is glossy smooth and easy to wipe clean.
Which leaves us with Scenic Water (upper left in group photo): all bubbles that had formed when pouring are still there.  The surface is tacky, sponge-like, and soft making dusting impossible.  I am fearful to even touch it too much as I don't want to pop the bubbles clumped together on the side of the basin and I fear leaving fingerprints on the gelatinous surface.

I will check in on them again at the year anniversary mark....

So, besides the water update, I have dollhouse updates...this customer's house had wiring checked over, lights added, flooring installed, and was picked up yesterday:


And the Newport that was supposed to be picked up 3 weeks ago was left with us for painting. (Blog Entry about Newport.) Customer thought she would paint it until they came to pick it up.  Her husband took one look at it assembled and said, "No, have them paint it; you'll never get it done!" Gotta love those type of spouses! Lol  We finished painting it on Thursday and it will be picked up today: 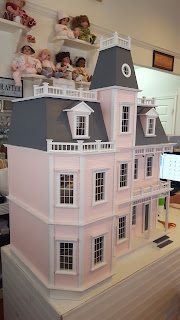 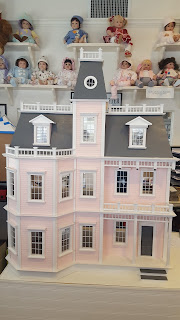 Priming started on 2 other customer houses we'll be working on this month.  The first is a little gray cottage, a bungalow dollhouse by Alessio, that the customer would like us to wire the interior for electricity:

Other customer house that needs work is a Glenwood.  It will get finishing, inside and out!
So Dad (that's him in the photo) is helping out with my work load by priming the interior of this Glenwood while I was finishing up the Newport and starting the wiring on the little gray cottage.﻿
I still have the water damaged house to be working on...I'm waiting for some Spring days so the table saw can be rolled outside and wood pieces cut to replace the porch roof I had cut off (Water Damaged Porch House).

Plus I'm making progress on my Asian Butterfly Garden scene.  First, I had found these little statues a friend had given me, but they are a neon green that (in my opinion) make them seem toy-like, disjointed, and disruptive compared to the rest of the scene:
It seemed like a stroke of fate that I found these in a local craft shop:
They will be in the Asian Garden scene too...I'm almost ready to mix my "dirt" with glue and start sticking my landscaping in place!  I tried to laser cut my Shoji doors a few days ago, but someone had modified the setting on the laser printer so I have to wait until Monday so that I can reset the machine to the proper settings (which I didn't have time to do the day I went in to print my Shoji doors).  But I believe my Butterfly Garden scene will be finished by the end of the month!

And I'm making a little thank you gift for a friend so I bedazzled this chair this week too.  I'll post pictures of this little scene as it gets closer to completion...
Lots of updates on projects, but I'm still buried neck deep in work so time to get back at it!  I'm off to wallpaper a customer's townhouse (and I didn't even show you photos of that dollhouse -- there's just so much going on here!).  Have a great weekend everyone!
Posted by Lori at 8:04 AM 4 comments: