Hope they look up! (video near end of post)

I have moved up to the Lady's Sitting Room and Bedroom.  I have drapes being made for these rooms so I really ought to have them finished by the time my curtains are finished later on this year!  Walls have been papered (although one wall is removable so that I may access electrical wires so that stumbling block did cause some delays as I tried using 1/4" thick wood (too thick for my doorway passage trim), 1/16" Styrofoam product (too flimsy), and finally I settled on a 1/16" thick wood (has some warping issues but I'm hoping it will work ok once doorway trims are in to securely hold the edges of the wood in place).

Ceilings were papered and painted white.  And I picked this medallion (#887) by Lawbre... 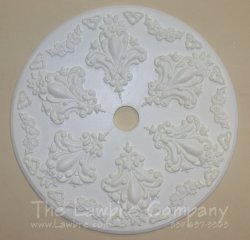 ...mostly because I liked the fact that the electrical ceiling canopy hole was pre-drilled in the center!  It was a bonus that I also happened to love the design on the medallion!

But white medallion against white ceiling paper doesn't excite me much.  I do love the design on the medallion and it's not really noticeable.  And given that the Victorian ladies entertain their friends in their sitting rooms, I knew they would have thrown gold up there to attract some attention (i.e. show off to their friends).  So on went the first two layers of gold....
Just gold by itself wasn't going to keep me happy so I had decided (before I even started painting the gold) that a light sage green and a pale pink were going on the medallion too.  Those colors would match the sage green furniture and the pink marble fireplace going in this room.
Now that some green was on there, I wanted more gold...so I revisited some of the flowers around the edge with gold.  But I only gave them 1 coat of gold to make them more of a 10- or 12-karat gold instead of the deep gold color of the center design.  Victorian people liked to put various-karat golds everywhere, right?
Will anyone ever notice the slight difference in the golds?  Probably not.  Well, ok, definitely not.  The only way is if I stand there and instruct them to notice it.  But I'll know. So I'm happy.

I needed a pale, pale, almost missed it, pink color.  But I didn't have any.  So I made some by mixing a darker pink with white and a touch of gold.
Now the Sitting Room's medallion is finished and needs to be glued up...

I think it looks great with the Getzan chandelier and Bespaq furniture that's going in the room: 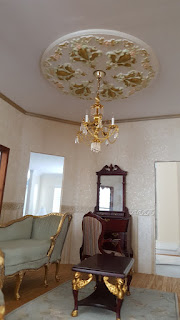 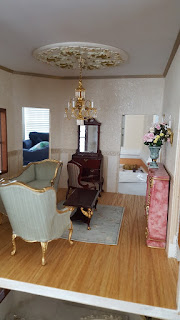 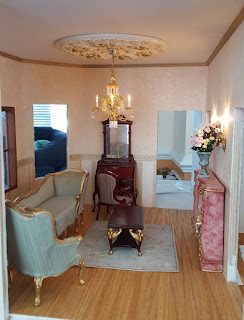 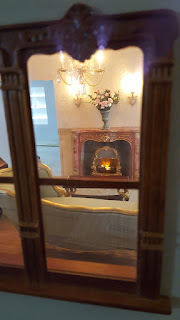 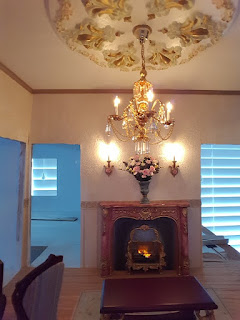 Now the bedroom medallion (as I get to that room next) will not have as much gold or color.  The bedroom is a private space.  Only the lady, lady's maid, and husband go into the Lady's bedroom.  No need to impress anyone.

Here is a video of this side of the mansion so far:

I love my remote control by Creative Reproductions 2 Scale!  (You couldn't tell that, huh?)  My biggest excitement about turning on the lights and video taping it was that THE LIGHTS ALL STILL WORK!!!  I haven't tested them in months (when did I finish the library?) and I have been moving the house around, cutting into the window openings to get windows to fit, and hammering on the house ever since (the top piece was attached by hammering nails into it; some electrical work involved hammering to insert some eyelets and ceiling canopies): all of which cause vibrations which could have undone my previous wiring efforts!  But it all works still!  No electrical issues so far!

My past mansion ceilings were fun, but labor intensive (Upper Library Ceiling Blog Post and Lower Library Ceiling Blog Post).  However, like this Sitting Room ceiling and the future Bedroom ceiling, I'm hoping to keep the rest of the mansion's ceilings a little bit easier to tackle.  Well, except the ballroom, dining room, and Gentleman's Game/Smoking room --- I have plans for those ceilings!.  Given how much time I spend thinking about my dollhouse mansion's ceilings, I really hope my dollhouse people look up!
Posted by Lori at 9:18 AM 2 comments:

Email ThisBlogThis!Share to TwitterShare to FacebookShare to Pinterest
Labels: My Mansion

Lost Cause to Realized Vision

The little Lost Cause dollhouse has it's new identity!  If you follow this blog, you already have read a few entries regarding this little house, including why I gave it the nickname of Lost Cause (First Blog Post About Lost Cause Dollhouse).  But now it is finished, so here's the recap:

First brought to us in sorry shape, this house needed some TLC:
Customer wanted to keep as much as the original as she could: her father made it for her when she was young.  But she wanted it painted white/green (exterior) and for the interior rooms to be painted the same colors as her real house.
We sanded down to the bare wood on the exterior, repainted, and replaced the windows/doors/balcony (creating new ones using the same design her father had used).

Read previous blog entries to read about the reconstruction of the windows (First Blog Post on House) and the doors (Putting Hinges on Door).

The interior rooms had been previously stripped by someone else.  There were fragments of paper still on the walls that we needed to remove and many imperfections in the exposed raw wood.  After spackling and sanding and covering the interior with wallpaper liner, we were able to paint each room to her specifications and put down flooring:
To read more about the kitchen flooring go here: Kitchen Flooring

We did not touch the tile work in the bathroom (seen below) as her father had done that and we wanted to keep as much of the original as we could: that's what gives each dollhouse their own personality and charm!
I gotta give Mom props on this one: My mother decided the half stairs going from the landing to the second floor needed to be remade.  Someone else (not the customer nor us) had glued the half steps on upside down and there were glue blobs and wood filler in various places on the steps.  So Mom spent an afternoon cutting and fussing, and using the original steps as a guide, she created some beautiful (I think) replacement stairs...
We also added lighting to the second floor (customer will add battery operated chandeliers to the first floor once she arrives to pick up the house and see the full selection of battery operated lights we carry).  Hidden behind the ceiling trim we installed LED strip lighting.

Overall the interior cleaned up rather well -- it's a colorful, cheery, warm home:
This little lost cause is now a proud realized vision of the customer's dream!  I'm so glad I had the opportunity to work on it!

Originally I wasn't planning a blog post about this customer project (a HOFCO Federal style front-opening dollhouse).  It was a straight-forward, simple paint job: change the white house with a grey/blue roof to be a white house with a very dark green roof.  Not very exciting; the before and after photos would probably be indistinguishable.  There were some repairs that needed to be done.  Front porch needed to be repaired with new railings attached, front door needed to be repaired or replaced, and exterior needed a general cleaning (there was a large fish sticker on the flat roof that needed to be removed).  But I did not anticipate any thing worthwhile to blog about.

Then two issues evolved which made me think it was worthy of a brief mention.

1. The interior flooring.  We were not asked to do any interior work on the final, approved, estimate.  But several wood strips were "popped" inside. 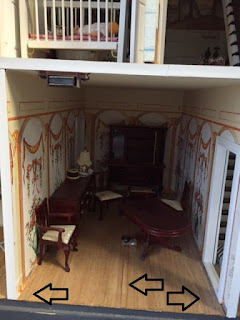 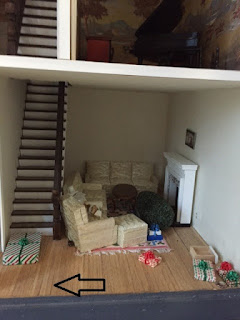 Some were barely noticeable, but others (especially behind the stairs) were ghastly.  So I gently pried some of them up and squirted glue under them and held them down to reattach them to the floor.  Overall it only took me about 30 or 45 minutes.  But I knew when it was donated the charity would appreciate a more presentable interior.  This is a common issue in dollhouses that have the veneer strip wood flooring.

2. The front door gap.  THIS IS WHY I HATE HINGES!!!!!  This front opening door has a very noticeable gap at the top where the door panel has dropped (weight sagging it down?), creating a gap.  Or maybe it was made this way and had nothing to do with gravity pulling on the door panel.  We built the porch area back up, putting shims under the left side, when we reinstalled/fixed it to help push the panel back up so the gap is not as noticeable.
Gap is not as obvious now.

Overall the house came out cute:

Even just having a new shutter and roof color and having a fixed porch and front door on the exterior did create a before/after effect that I was not expecting.

Now I was glad I had kept the before photos once I saw how the porch and railing repair, new front door, new trim color, and a general clean up made such a difference.

Next up I'm finishing a customer's long overdue 1970s themed Ranch dollhouse and then (in July) we are getting in a dollhouse that has been in a family since about 1890 that needs some TLC!