When my neighbor, Chip, was getting ready to move away he put two items out in the trash that he let me take. First item was a beaten-up Craftsman toolbox. Drawer missing and another dented, it had seen better days.....
I had cut wood walls to convert it into a garage, but it was making the toolbox very heavy to move around.  Plus I felt like I needed to glue the wood pieces together inside the toolbox (which meant wallpapering inside the toolbox too - which I could do, but wasn't in the mood for the contortions I would have to do in order to wallpaper).  I always read about people using gator board or foam board to create walls...so I decided to try it:
Back Wall and floor had to be 2 pieces since the hole opening into the space is smaller than the area it needed to cover.  But flooring and trims will cover the seams.

I had to cover the old drawer supports so the side walls have bump outs where those were located. 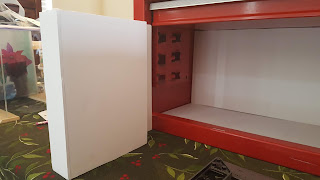 Itsy Bitsy wallpaper company had a great garage floor and some wall tile papers that coordinated!  Technically the tile paper was called "French Tile" but it looked like garage walls to me...

As you can see, I kept one drawer (technically two if you count the top of the box that lifts up to reveal a cavity too).
Last remaining drawer was to hide the battery pack and wiring for the 4 garage lights in the box.  It's not a pretty wiring job, but it gets the job done.  This step also took a while since I realized I had left most of my electrical tools at the store and (at that time last night) we had over 8" of snow (i.e. I am not driving over to the shop to grab my tools).  But luckily I found my solder iron (after some searching - it was in a "safe place") and there was a 4" long length of solder in the bucket with it!  And in my "left over's drawer" I had some left over wires from fixtures whose wiring I had shortened when I installed them.  And there was a small bag of about 12 eyelets in the left-over's drawer too!  I did remember to previously purchase and bring home the battery pack and tapewire.  So I had barely enough supplies to finish the wiring! (But still had to spend about 15 or 20 minutes searching for an extension cord so that I could solder since the soldering iron cord wasn't long enough to reach the table where the project was located.  I swear 75% of my mini play/work time is spent searching for the tools and supplies I need to do the next step of my project!)
I have a collection of stuff to put on a shelf, rack, or table but don't have the shelf, rack, etc.  So I will work on that later.  Most were bought from Wright Guide Miniatures before they were forced to retire (someone stole their truck full of all their displays and all their inventory a year or so ago in Las Vegas - so sad).

Originally I had a Ford Sports Car to go in the garage too, but it was 13" long and the box is only 10-1/2" deep so the car is being put aside for some other project, someday.  But that meant my garage now looks a little sparse...and I don't think the mechanics' creepers (or whatever the tool's real name is) are used with motorcycles so the red and wooden mechanic creepers (seen on the left in the photo above) may be ditched.  I have to verify with my brother-in-law; he's a car/motorcycle guru; he'll be able to tell me what would or wouldn't be appropriate for this setting....

The box is looking sparse.  I need to put another fixture on the left side to hold all that Wright Guide stuff I have.  And the back wall is getting some motorcycle-themed posters/artwork.  I have these 2 plastic party favors I was going to use as the motorcycles in the roombox until I discovered the 1:12 Harley Davidson replicas.
I am toying around with the idea of busting them apart and making some sort of wall hanging art piece out of them.  But I'm not 100% sure.  I will continue to add to the scene throughout the next few months/years (including getting a plexi-glass front protector), but for all intents and purposes it is a completed project!

(And for those wondering, the other item I took from Chip's trash was an old computer cover (?) (I'm not a techie so I don't know what you call computer parts, but it's not the actual guts of a computer, but just the outer shell of the console) -- technically 2 of them -- that I will convert into a 1990's or early 2000's business office.  Just brainstorming what type of business it is (architecture? accountant? web design company? etc.) before I start constructing it's mini elevator and offices.  So that may be a project later on this year or early next year!)

For now though, there is 10" or 11" of snow that needs to be shoveled and a bunch of windows from a customer's Victoria's Farmhouse kit that needs to be painted and assembled so I'm using this snow day to get a lot of stuff done!
Posted by Lori at 6:07 AM 7 comments:

Getting the Mansion's ballroom ceiling painted has been quite a dance and an effort in patience.  The house is upside down so that when I glue the ceiling panels in I won't have to clamp them in place (I'll let gravity do the heavy work for me :) ).  Plus the ceiling panels could lay flat on the ceiling in between the times I had available for painting them (i.e. they didn't take up space on my dining room table when I wasn't painting them).  I used Unique Miniature ceilings (needed 3 of them to fill the giant ballroom ceiling space)!

Realized when I was cutting the ceiling panels that the ballroom will have crown molding.  And crown molding won't fit up against the ceiling since the medallions make a drastically uneven surface.  So I had to install a filler piece of stripwood for the crown molding to sit on once it's installed.


The design is not only small, but in several places the tiny details in the design were not fully imprinted/cast so in some areas the design details are simply what I painted to give the illusion the design is there.
After weeks and weeks of repeated attempts to paint neatly, followed by repeatedly going back to touch up paint as I didn't paint as neatly as I wanted all the time, it only needed one more final review (in which I discovered 2 medallions I had forgotten to paint the green sun rays on one side, an entire row I forgot to paint the green circles, 2 swirly bits I missed with the blue paint, and a few gold half circles in the center of the medallion I had not painted).  Out of 100 medallion designs I am not going to beat myself up for having missed these...at least, I won't beat myself up as much about it anymore (it's been a few days since I discovered and painted/fixed them). 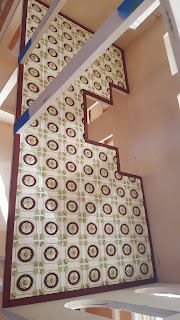 I have not glued it down yet - there is a gap near the back wall that I need to fill in with plaster and paint light ivory to blend in with the ceiling and I think some of the crown molding stripwood fillers need to be trimmed slightly...But it's almost done!  So close!  And once it's glued in, the house can be flipped right side up again and the exterior finished!

In the meantime, my beautiful curtains (made by Designs by Janet) arrived and although I was very intimidated and nervous I would mess them up, I did finally get them glued into place in the lady's sitting room and bedroom!


However, when I went to glue in the bedroom curtain, I realized that the bedpost will hit against the curtain and if I move the bed over a bit it crowds the rest of the furniture in the room.  So the bedroom needed to be rearranged...
After rearranging:

I believe the Lady's bedroom needs some ecru sheers on the window too -- I don't like seeing the gold window trim and walnut stain window parts.  So ecru sheers are being purchased soon....and I have to find a new spot of the rug (currently under the bed mostly) so it's seen more.

But Mansion is getting some love right now.  As are some other projects!  I'm hoping to do an update, once a week or twice a month (depending on how busy I get), regarding other projects I have going on this year!  Hope everyone had a fabulous New Year!  2019 is going to be a very productive mini year (I hope)! LOL
Posted by Lori at 7:51 AM 8 comments: