I have had a vision in my head for the Butler's Pantry in my dream Mansion.  Lower cabinets of drawers for the silverware and napkins/linens and glass door upper cabinets for the dishes and glasses.  But no one had exactly what I wanted.  So it's time to Bespaq-bash!  (Go ahead, say "Bespaq-bash" 10 times fast!)  I bought 2 pieces of Bespaq (dresser drawer pieces) to create my lower cabinets:
I found my lower cabinets!  They were just stacked one on top of the other and would need to be separated (without breaking anything!).  Never an easy task....
Now, if you are familiar with Bespaq furniture, you know that sometimes (most times) you can sneeze in its general direction and pieces will break or fall apart.  But, of course, since I wanted these pieces to come apart, they were solidly glued and attached.  The Exacto knife could not slice and pry these pieces apart!
So I resorted to drastic measures and brought out the saw to get the work done!
So the cabinets on the left will need some filler spacer wood at the bottom to get the counter tops all the same height on top but since Minwax Bombay Mahogany stain is a perfect match for Bespaq mahogany wood that is not a big deal to add a piece of wood down there and stain it to match.  I also have to sand some of the edges so the pieces butt right up to each other and look like one solid long piece but kids are asleep so I don't want to break out the noisy I-drill sander.  I can do that tomorrow or Monday (my "weekend" since I work Tuesdays - Saturdays).
Now I need to stain and cut a piece of wood to get all the lower cabinets the same height.  And then the corner space will need to be filled in and countertops put on.  Then I will need to find/play around with upper cabinets (represented in the photo by the white box I'm holding) to hold all the pretty dishes and glasses the Victorian family owns.  Rumor has it that Bespaq is coming out with new kitchen furniture this summer - single pieces, including upper cabinets!  Hopefully they will be available in mahogany stain and have glass front doors!  If not, I'm sure there's other Bespaq furniture I can bash up to create what I want!

Oh - and if you were wondering about the pretty pieces left over from the dressers:
Not sure where I'll use the feet, but the other pieces will go over the Lady's doorway from her bedroom to her sitting room!  It'll match her furniture design perfectly!

Yesterday I had cut out the doorway from the Lady's sitting room to her bathroom and this evening I used the left over scrap piece from cutting that new doorway to fill in the original doorway opening out to the hallway.
Yes, those are popsicle sticks holding the scrap wood in place as the glue dries -- my tools are so high tech!  LOL

So, I'm taking baby steps, but work on my mansion is (slowly) happening!

Email ThisBlogThis!Share to TwitterShare to FacebookShare to Pinterest
Labels: My Mansion

Still Dreaming . . . But Getting Closer!

I did two major miniature events this year.  One was public (Chicago Show) and one was private (Mother's Day).

For the first time in my life, I got to attend the Chicago Show!  A friend and I went to both the 3 Blind Mice show and the Tom Bishop show (they happen the same weekend - gotta get our money's worth out of the plane ticket to get there so hit as many shows as we can! LOL).

And although it was disheartening to see how many pretty things I can't afford, it did inspire me to make my mansion a priority.  I always put customers' projects ahead of mine (I bring home parts to paint once the kids are in bed or I bring the entire house home to work on instead of working on my own projects).  That's not gonna happen anymore.  From now on, I get to work on my stuff too!  My favorite miniatures I purchased for the mansion at the Chicago Show were:
I'm not sure where this Michael Reynold's piece will go, but I fell in love with his stuff.  It really is drool worthy!  I cannot believe I had never heard of him before this -- although my wallet would be happier if I had never discovered him!
I also purchased a fantastic Zebra head mount to go in a "game room" (Game as in animals, not board games as my daughter thought).  I did not take a photo of it before I packed it up, but trust me, it's beautiful.  It prompted me to re-imagine the billiards room.  I love my pool table and I especially love my billiard light (Post on Billiard Light Fixture) but it always bugged me that the only objects in this billiard room was going to be a pool table and a light fixture.  But my friend talked it out with me and we decided that I could still use my billiard room light fixture, but convert the room into a Game Room/Smoking Room.  Then my cheetah chairs (which were out of place being stuck in a corner in the Master Bedroom) could go in this room along with my new Zebra head mount and it would still be a "manly" room!  Remove the pool table and insert bar!  I'm liking this idea!

So that was the public miniature event I attended.

For Mother's Day, my kids (and husband) gave me a great gift: kids ran off for about three or four hours and played with their miniatures in the basement (with no fighting involved!).  Husband took care of all food needs for the day (so no cooking or preparing food for me!).  So I had a chunk of time to play, er, I mean, work on my mansion!

First up, arch way had been cut and needed to be tested to ensure it was cut correctly.  Needed some sanding and some more minor cutting here and there, but ultimately it was perfect:


While there I removed a wall for the stair area: the wall was supposed to provide a hallway for the stairs.  But I thought it just made the front foyer area look small.  So I removed the wall.

So, I also don't like the raw wood stairs.  Even if I stain them they aren't achieving the level of elegance I want for this house.  But the only finished stairs that work in the space are the space-saving stairs by Majestic Mansion. Luckily (as with most Majestic Mansion products), I LOVE the stairs.  But there are two issues with putting the Majestic Mansions stairs in the foyer:

First issue - all the stairs stick out over the doorways.  On the upper levels I can cut the stair opening longer so the steps sit further back in the hallways thus clearing the doorways they currently overlap.  But on the first floor in the foyer, there is a wall that prevents me from cutting the opening larger.  So I will modify this doorway to have a narrow door - which will work just fine as this is the doorway to the Butler's Pantry so only servants would be going in there anyway.  I'm even considering hiding the doorway under the stairs instead -- but that may alter my plans on the inside of that room so I am pulling a Scarlett O'Hara (I'll think about what to do tomorrow, or next week or even next month). 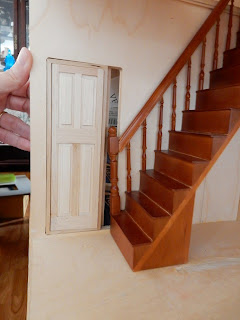 Second issue: railing is on the wrong side of the stairs now!  And Majestic Mansions doesn't make this space saving stair with the railings on the right.  So . . . I spoke to Majestic Mansions about it and they do have a new staircase, but it's not quite as elegant as I'd like.  I have to now find a stain that matches (which I had to do anyway for the Ballroom Stairs) and move the spindles from the left to the right.

Also, since kids were behaving, I cut the doorway from the Lady's Sitting Room to her Bedroom.  But in cutting the doorway I discovered a nail that needs to be removed and there is a mis-struck nail along the back wall of the Lady's Bedroom too.  There are no ways to access the other end of these nails so I have to find or buy a metal cutting tool to remove them.
Then I used the piece (I had just cut to create that new doorway) to fill in the opening from her Bedroom out to the hallway.

And as long as I was taking out the Spackle, I filled in the double door opening from the second story library too:
Last thing I got to do before I had to call it a day: Remove the wall to create the Family Room.

I don't like small hallways so this wall needs to be removed.  But then the room to the left can't be a private bedroom or something like that.  Which was fine because I wanted that room to become the "Family Room".  It will be connected via a spiral stair to the Nursery in the room above and once a day the nanny brings the children down to visit with the parents.  This is the room where that happens.  So wall must go!
I am putting my birthday Bespaq set in this room along with my new Michael Reynold's piece. 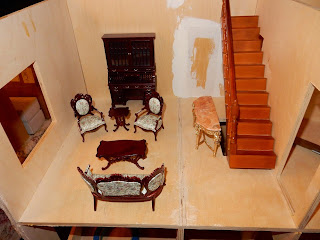 The double window opening on the left will be enlarged to be the entrance to the spiral stair addition.  The desk on the back wall is representative of a baby house that is packed up safe somewhere but it is about that size so it gave a good reference point.  Now the Michael Reynold's table matches the fabric well enough, 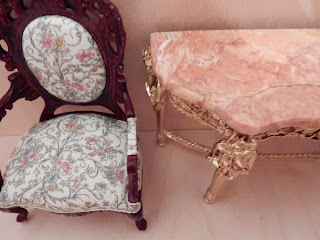 but it bugs me that it is the only gold piece in the room.  It seems out of place.  I keep moving it around but I need something to help bring this room together . . . 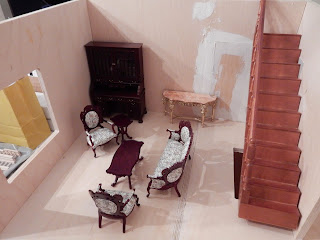 So work is progressing!  And now, thanks to my re-found desire to re-prioritize when work gets done on my projects, I suspect more work will happen quickly on my Mansion!