I disappeared for a while.  I didn't mean to.  I had been feeling poorly on and off since last year and in January/February 2016 it became a constant pattern.  Spent months doing various tests and the diagnoses kept piling up.  Surgery was scheduled and then there were complications from the surgery.  End result was that my vision of sitting around, sipping coffee, creating miniatures, while I recovered was a fairyland pipe dream.  Real life involved more tubes, IVs, pain killers, soreness, and exhaustion than I ever imagined!  And, when the tubes, pain killers, etc. did leave, the energy and mojo to mini did not return!  Very frustrating.  But it's finally creeping back and last week I painted 2 pieces of wood and this past week I experimented with some water effects!

In the Spring I said I was going to experiment with various water products because I have had friends lament over using some that then turned yellow, cracked, separated from their project, etc.  So I wanted to play with some.  The only one I had used before was Scenic Water (by Deluxe Materials). 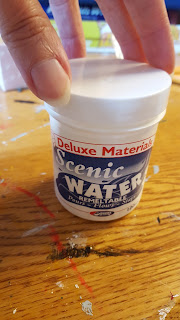 I've used this a lot of times but will admit I was not happy with it.  I had filled a miniature rain barrel with it and years later it looked awful. It pulled away from the edges of the rain barrel a little bit.  Plus dust got on it and I can't get the dust off.  Luckily the scene is an abandoned cottage so it doesn't upset me too much that the water looks awful.  I do like this product and how easy it is to use.  Remove the lid and warm (directions suggest in a pot of hot water but I took a class about how to use Scenic Water about a decade or two ago and the representative from the company said you could warm it in the microwave in short 10- to 20-second intervals; So, that's what I do to liquidize the substance).  I do wonder about this product though when even warming it up it is not a clear liquid: 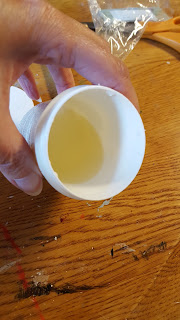 The nicest thing about this product is that if you don't like how it sets up you can remove it from your product and reheat it to liquid form and try again (providing you did not add something to it like a painted fish or flowers or spray it with a sealant that will alter the chemistry when you warm the stuff back to liquid form).  So I poured this into my bird bath.... 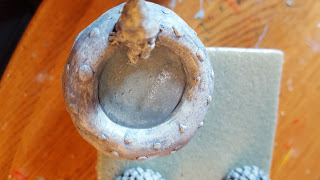 Wasn't happy with the bubbles that appeared but was able to pop some and move the others with a toothpick...
I was happy to see that the "water" was clear when I poured it even though it had been yellow in the container.  We'll see if it stays clear as the weeks turn into months....

Next up was another Deluxe Materials product called Solid Water. 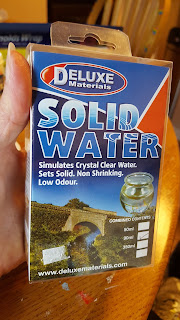 I had never used it before.  And I got very nervous when I opened the box and found this inside: 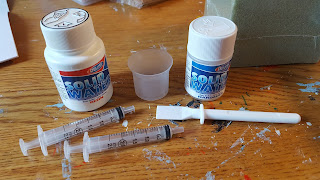 This is a lot more work than just microwaving a container like their other product.  But, I had used another product similar that involved mixing two ingredients so I followed the directions and poured it into it's birdbath: 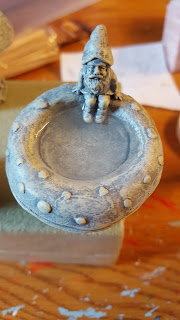 Clear and no bubbles!  Nice.  Now to see how it holds up over time....

Then came a product I helped a friend use back in April (Last paragraph of this post talks about the "water" product) called Pour-on (by EnviroTex): 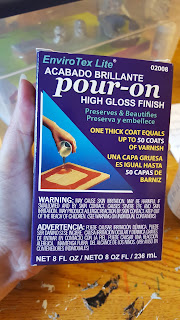 Again, this is a two part mix combo but they don't supply the measuring tools like the last company did. 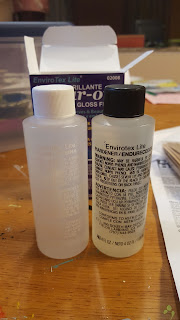 Was highly disturbed by all the bubbles that formed while stirring (although directions say that blowing across the surface of the "water" will break these bubbles)... 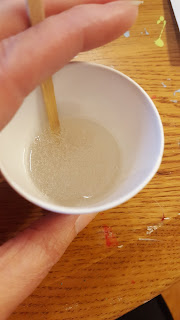 Was also concerned because directions say to pour only 1/8" depth at a time. And my birdbaths are about 3/16" to 1/4" deep. I'm not going to have the patience to do this twice! Certainly not when I have to wait for a day or two between applications! I'm in the mood now, I'm doing it all at once.
I poured it into my birdbath and sure enough all the little bubbles went with it. 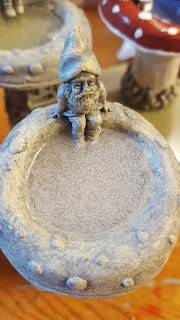 Microscopic and visible bubbles fill the birdbath! After using a toothpick to stir and blowing across the surface until I was light headed and dizzy, most of the larger visible bubbles were gone: 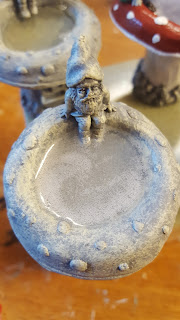 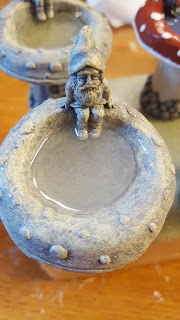 So I poured this into a birdbath I had painted over the summer to see how it would look with a painted backdrop. 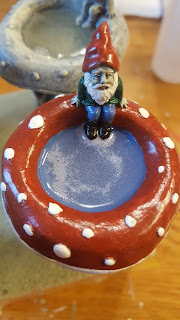 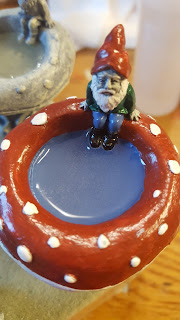 It's only been a day or two so they still have a ways to go before I'll know which stands up better over time. So far the Solid Water is having a reaction to the paints on the birdbath or with the material the birdbath is made out of as the speckled bottom of the birdbath have become cloudy streaks... 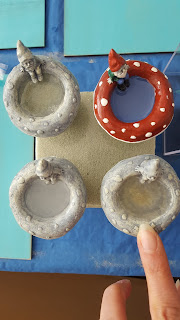 ...You'll see these again as we check back on them throughout the future.

In the meantime, my miniature mojo is back and it's the perfect time for me to tackle my Halloween project from years and years ago: my carved pumpkin!
Posted by Lori at 11:00 AM