This little house was supposed to be a run-down cabin in the woods, but things kept getting nicer and nicer (especially in the bathroom) so it's become a hunting cabin in the woods that the hunter is slowly renovating so (s)he can retire and live there one day.  But, for now, many aspects of the house are still rustic, and the hunter is basically living a glorified camping lifestyle when hanging out there on the weekends. 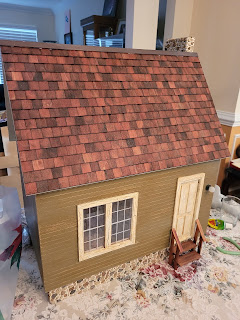 The kit was a Real Good Toy's Keeper's House (aka Cape Cottage Jr.) that I modified to have a foundation, a chimney, and some ridiculously small front steps. 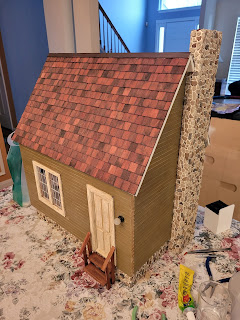 Originally I thought I would finish the kitchen and foyer area today (thanks for the snow day, Mother Nature!). But I ran into an issue - mostly being that the stove was too big and too nice for the kitchen.  So I need to find a more rustic, smaller stove (like a Coleman camping stove).  So, I worked on finishing the shower instead...

About a decade ago I had created this shower stall out of balsa wood: 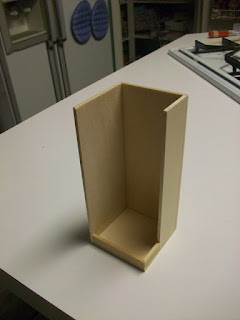 I installed it into the house: 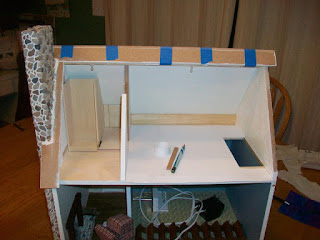 At some point in time I even wallpapered it with "tile", painted the room, and installed flooring!  It just needed a shower head, shower valve (the handle to control the water coming out of the shower head), a rod, and the shower liner. 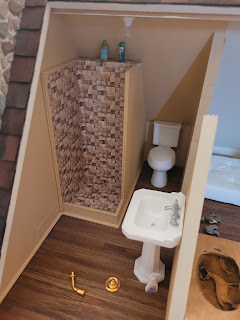 I had an old broken whisk that had the perfect wire for the shower curtain rod. 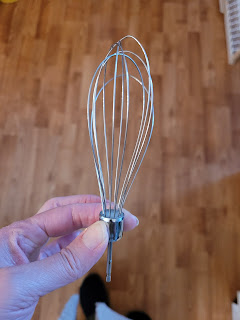 Used my wire cutters and needle-nose pliers to cut and shape it more into a curved rod.  My next issue was finding a fabric that looked like a plastic shower liner.  But nothing really looked right.  Fabrics look like fabric (and we know fabrics and I don't always get along!).  I really wanted something that had the slick, plastic look of a vinyl shower liner.  So why not use actual plastic?  I cut up a plastic grocery bag into a 6" x 5" rectangle and put a piece of tape over the "top" edge to reinforce it. 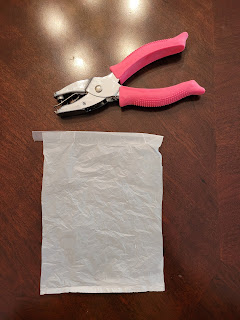 Used my paper punch to create little 1/16" holes at the top, strung the liner onto my rod, and used an earing rubber stopper to hold liner in place. Since I couldn't fit my drill into the bathroom (years ago some genius went and glued the shower in place already) I had to use a tack to make my holes and stuck the rod into the holes. 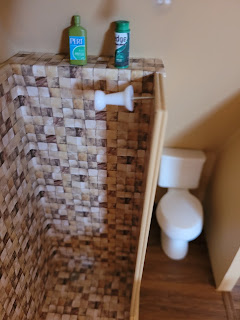 I always have and use the best tools. LOL

So the shower liner and rod are in place! (Technically it needs a tiny piece of sliver where it goes into the hole so I have not glued it yet so I can add that when/if I find something that will work.) 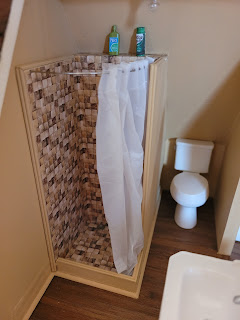 Glued the shower head and valve in place and THE SHOWER IS DONE! 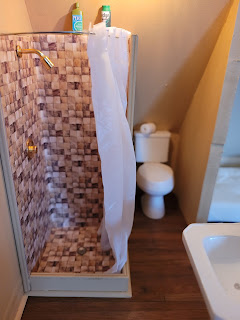 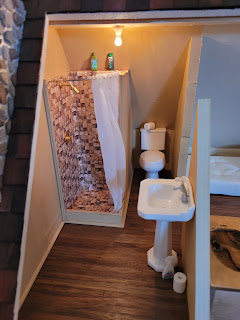 As you can see in the photos above, I turned on the electricity once the shower was done - to discover that at some point in time in the last few years, the fireplace stopped lighting up.  And of course the wiring for it involved me sticking my entire head into the dollhouse and turning my head at odd angles.  I eventually gave up trying to access the wiring in the chimney and drilled a hole to beneath the house and ran the wires to the tapewire accessible right by the junction splice (much easier to get to!).  After an hour with the fireplace wiring, I did get the flames working again.  Now to attempt to make a Coleman camping grill for the kitchen, and work on creating a proper mantle to hold the TV, DVD player, sound system, and PS4 that I want to make for my hunter....