Back in 2009 this dollhouse was brought to us for an update.  Old wallpapers were removed and some rooms were painted.  Daughter so enjoyed playing with the house that the dollhouse has now been returned to us in 2014 for clean-up, proper electrical installed, and wallpapers.  I say "proper electrical installed" because somewhere in the last 5 years someone (not us) wired the dollhouse for them, but in order to not put tapewire on the painted walls, they ran wires everywhere (EVERYWHERE) so that lights would be in each room:

So the first step was to remove the tangle of wires and extensions.  Even within the rooms, wires were running all about . . . After wires were all removed, tapewire was installed in the outer rooms (center hallways were to remain untouched as customer wanted to keep those original wallpapers from her childhood).  Then floors were cleaned up:
Wallpaper was installed, which was a trip as none of the crown molding or baseboards were removable!  The baseboard of the room above was the same piece of wood that was the crown molding for the room below.  This one piece of wood trim was baseboard, crown molding, and held the floor in place so removing either one was impossible without taking the entire house apart! 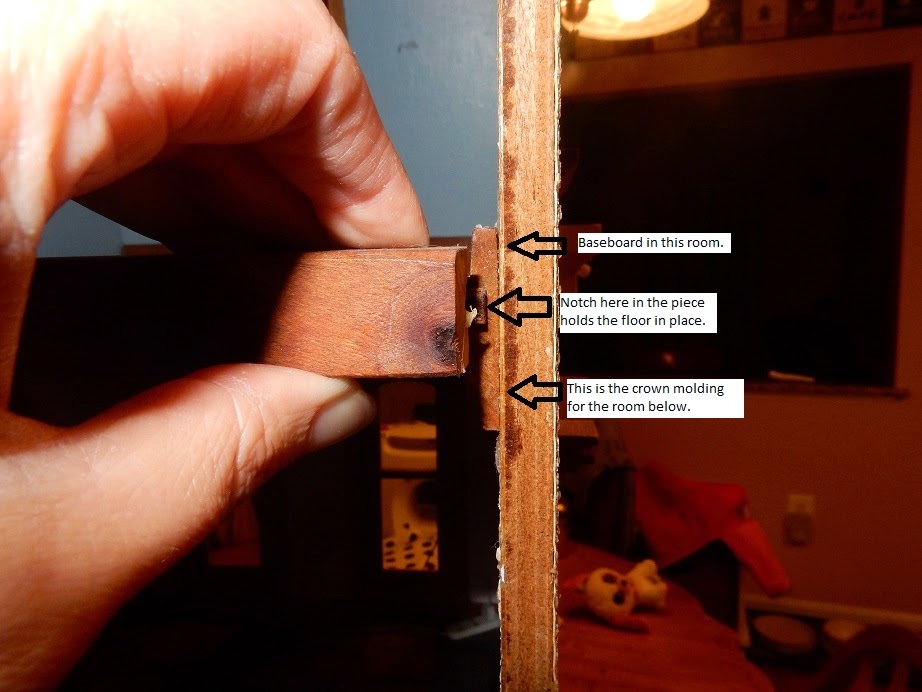 Likewise, the window trims were all glued firmly in place.  So wallpaper had to be cut exactly as there was no window trims, crown, or baseboards to cover up mistakes!  Some of the more difficult rooms I created templates for (using small scraps of paper taped together to get an exact template of the wall).


There was one other room (the bathroom) that we were going to wallpaper, but the paper arrived in a different dye lot than shown in catalog.  So we simply wired that room in such a way that it could remain painted with no wires showing.

I hope the young lady who is getting this house continues to love it as she used to and I hope that the house appears cleaner and easier to play with now that the network of wires are removed/hidden behind wallpapers.

(I'm still working on the Harborside Mansion - that house is not complete quite yet due to an arch ordering delay and a lighting issue; check back soon for an update on that house!)